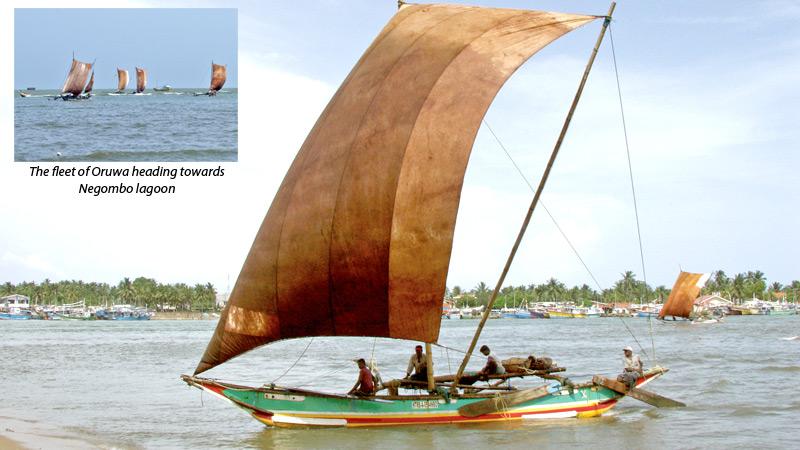 One sunny morning, I was at the Negombo Lagoon to do a photographic essay on the daily life of Karawa fishermen whose Oruwas (sailboats) take the viewer to a time when man was quite close to the elements and had to fight the forces of nature .

The Negombo and Duwa lagoon is a great place to watch the fishermen at work. Every morning, except Sunday, the fishermen of Negombo, many of whom live on the small island of Duwa across the lagoon but connected by a motorable causeway, bring in their daily catches of crabs, prawns, seers and other fish. Then they mend their nets on the beach.

The main tool of trade is the Oruwa, an outrigger canoe that bears similarities to those used in the Comoros Islands off Mozambique, Africa. He has been here in Sri Lanka for a long time. The Roman historian, Pliny, who visited Sri Lanka in the 1st century AD, said this ship was a typical sight off the coast of Lanka.

Oruwa can be found along the west coast of Negombo and can sometimes be seen in offshore fleets. Their rectangular sails spread out on the horizon like a deck of cards. Perhaps the most remarkable feature of the Oruwa is its method of construction. With the exception of half a dozen brass bolts used as counters, the various parts of the contraption are either fastened or sewn together. The Sri Lankan shipbuilder literally threads a needle and, stitch by stitch, assembles his craft.

The Oruwa typically trawl shrimp several miles offshore, cruising back and forth, while raking the muddy bottom with a drag net. After each sweep, the catch is thrown onto the seashore and the fishermen sitting cross-legged in the middle of it, sorting the fish into one basket, the prawns into another, while shells, seaweed and an amazing collection of garbage bottles, sea snakes and plastic go to the side.

A fisherman brought the Oruwa into the wind and adjusted the sail so that it protected most of the boat. Fishermen lay on the platform, sharing space with the two crew members, while one fisherman balanced on the gunwales and used the mast step as a pillow. The only person left in the sun was an experienced fisherman who tied a piece of cloth around his head as a scarf and dozed lightly at the helm, occasionally kicking the steering oar to hold the boat in position .

The rest of the fleet followed their lead and soon, less than a square mile out to sea, more than three hundred men were sprawled in their boats taking a siesta. Fishermen slept for about an hour, then a fisherman turned the boat and let the sun wake us up. Once again they untangled the lines and the net and threw the sinkers overboard. After three short streaks, the wind has suddenly turned towards land – it’s time to go home. The whole fleet turned as if one hand controlled all the helms and like a nautical ballet a hundred sails turned towards Negombo.

Once the catch is sold, the money divided, the crew pulls their Oruwas onto slipways and washes them with sand and water to clean off marine insects. The oruwa are rarely painted, but once a week on Sunday they are given a protective coat of coconut oil.

Fishermen have their own way of life. They take life day by day. No one thinks much about the future. Everything they earn goes directly to the market, but the money doesn’t really matter to them. When someone dies or gets married, they don’t have enough money to throw a party for their friends.

So the community helps them. Rumor has it that on such and such a day everyone will go fishing to pay for a funeral or a wedding. The whole day’s fishing, that of a hundred boats, goes to the family, and it can cost thousands of rupees. If the family is lucky, there will be plenty left over after paying all the expenses. It’s an old custom and no one knows where it comes from.

The Oruwa of Negombo have recently taken on a new importance and attracted much attention.

Rising fuel prices have changed the vision of the future and the fishermen’s dream of being behind the wheel of a powerful motor launch is fading. To help keep men away from diesel engines and outboard motors, shipyards producing fiberglass speedboats are beginning to experiment with making Oruwa from the same material. Progress looks backwards, and the traditional outrigger canoe is perhaps the angler’s best way to sail into the future.