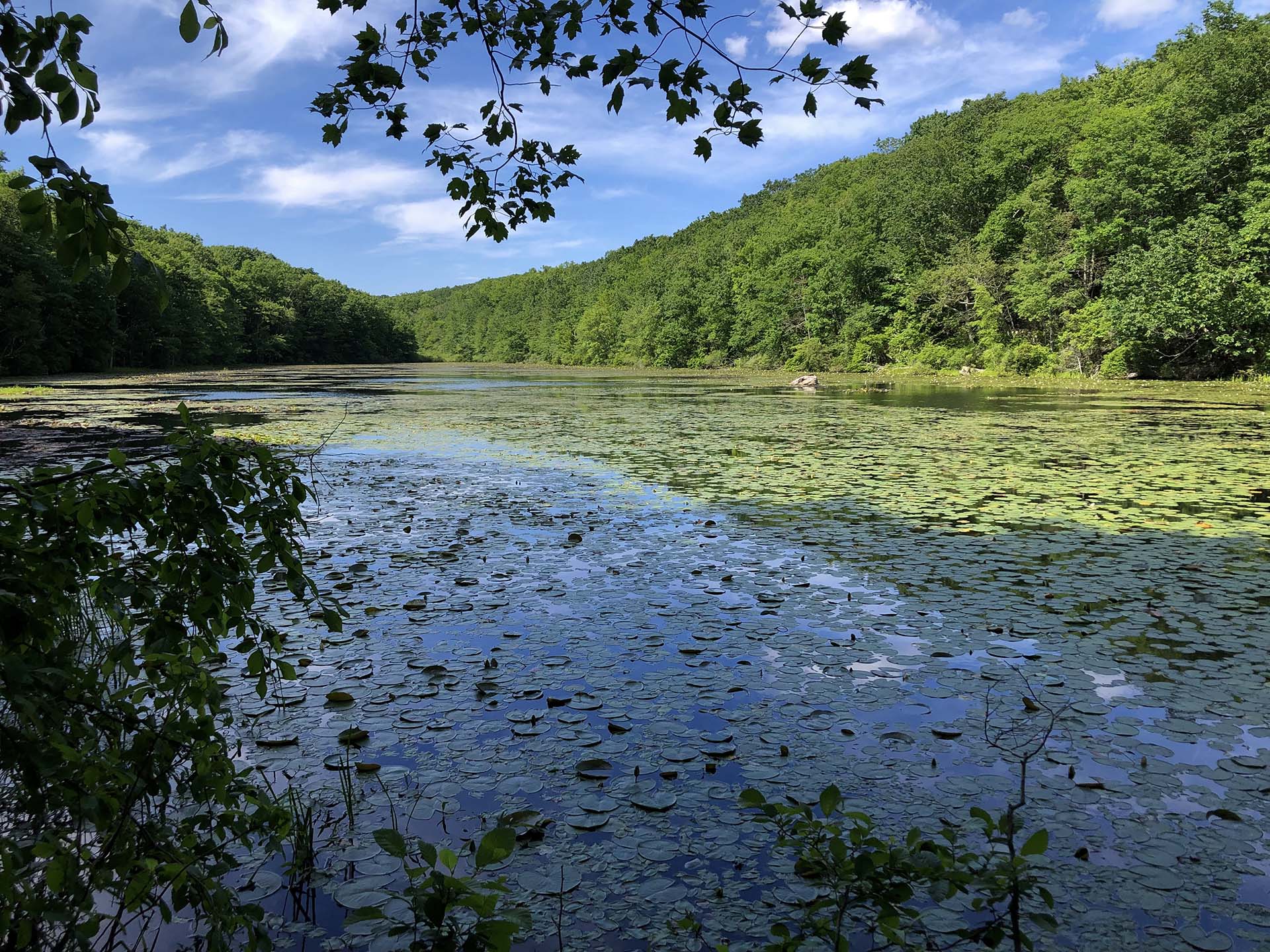 Hike through the shoreline woods at this CT Coastal Nature Preserve

More than 200 years ago, Simon Smith stood high on a hill and surveyed the ledges overlooking Long Island Sound. The perfection he saw in the granite cliffs led him to open a quarry and build a stone house on the shores of Smith Cove. From this simple opening, an era of quarrying in East Lyme began and sent pink granite across the country.

I stood over a pile of quarry residue and ran my finger over centuries-old chisel marks in a block of granite, easily imagining teams of men toiling on the ledges of what is now Oswegatchie Hills Nature Preserve. A loop trail marked with yellow blazes brought me to the top of Mount Tabor, at the northern edge of the reserve and quarry abandoned for over a century.

The 457-acre preserve, one of the largest tracts of open space along Connecticut’s highly developed coastline, is a rare piece of coastal forest on the Niantic River that opened to the public in 2007. is to extend the reserve to over 700 acres along an impressive contiguous open space running north to south between East Lyme and Waterford.

Visitors to the reserve can explore approximately seven miles of trails through two hills separated by a deep hollow. The trails parallel the scenic lily-covered Clark Pond and a deep forest of oak and pitch pine dotted with dozens of glacial erratics. But you may have to wait until the leaves are cleared from the trees to see any water, with a pair of lookouts in the reserve blocked by leaves during the summer and early fall.

With multiple ways to explore the reserve, I’ve created a loop that hits all eight “points of interest” including a view of the pond, rock cave, and granite quarry. The trails are clearly marked and easy to follow with “you are here” maps on the trees and letters of the alphabet marking trail junctions.

All trails wind along the shores of Clark’s man-made pond, though the red blaze-marked trail offers hikers the most scenic views of the water. The pond was created so that fishing vessels could have ice in their hulls to preserve their catch. There are several short side trails leading to views overlooking the sparkling pond, and when I visited, a pair of huge snapping turtles were basking in the sun on a large lake.

The red trails on the west side of the pond include a side path leading to a view of a wetland from atop a ridge, a pit filled with white quartz, and a small cave created by a pile of boulders. Young hikers will have fun weaving between the rocks and exiting on the other side. The woods are filled with mountain laurel, the state flower.

At 243 feet, Mount Tabor is the highest point on the preserve and offers views of the Niantic River, Long Island Sound, and Fishers Island. The top of the hill is populated mostly by scrub oaks, blueberries, and pitch pines that are just high enough to create the dreaded “Seasonal View” designation. But it also gives you an excuse to come back in late fall or during winter and early spring to see the view.

The Mount Tabor Loop Trail also passes through the abandoned Smith Quarry. This is where I spent much of my time exploring the piles of square granite blocks with chisel marks and drill holes. Flat rocks and ledges are also a great place for a picnic. According to the trail guide, teams of oxen or horses dragged the granite up Quarry Dock Road to barges to transport it to places like Grand Central Station where it was used in the foundation. “Over the next century, granite would be mined from this quarry and loaded onto barges from a quay built of granite blocks on the Niantic River, for shipment to construction sites across the country,” according to the East Lyme Historical Society.

The trail guide notes that the reserve is “ideally suited for a wide variety of passive recreational activities” and is a “truly unique and beautiful place”. That’s absolutely true, but mark your calendar to return in late fall, winter, or early spring for a hike to the top of Mount Tabor to fully experience Oswegatchie Hills.

What’s in a name?

I wish we knew! While “Oswegatchie” is generally believed to come from the Iroquois language, the translation has been lost to history. That hasn’t stopped the debate over its meaning, with theories flying around for at least a century and a half. Also, the name has been used for the location of Connecticut since the late 19th century, but no one seems to know precisely why, as it’s a name that has its roots in a place in upstate New York. .

This is a carousel. Use the Next and Previous buttons to navigate

Directions: Take I-95 to Exit 74 and Route 161 south to Oswegatchie Hills Road and Veterans’ Memorial Park. A map kiosk at the reserve trailhead will help you plan your trip. Go to oswhills.org for a color map of the reserve.

Accepted animals ? Dogs on a leash are allowed and must be cleaned up afterwards.

Niantic Children’s Museum: Here you’ll find an interactive, hands-on, and educational place for kids “to try out new roles, let their imaginations run wild, and feel safe as they explore the world around them.” The 5,000 square foot museum has outdoor play space, and almost everything is wheelchair accessible. There’s a discovery room and science activities, and kids can pilot a fishing boat, play as an architect with giant foam blocks, and ride a fire truck. There is also a “toddler land”, a tree house, a whale drum, a climbing wall and a zipline. 409 Main St., Niantic, 860-691-1111

Lilian’s Coffee: This American bistro serves an “eclectic mix” of fresh, local, organic and gluten-free ingredients “in a bright and cozy atmosphere”. The cafe notes that “food is at the center of unique preparations” and ever-changing menu items and specialties, from crispy Point Judith calamari to wild Alaskan salmon tacos to homemade falafel. A raw sea bass includes a modest selection of native oysters. There is a full service bar and restaurant on the outdoor terrace. 374 Main St., Niantic, 860-739-2233

Niantic Bay Boardwalk: The boardwalk is 1.8 miles long and runs along the Long Island Sound from Cini Park and the railroad bridge on the east to Hole-in-the-Wall Beach on the east. ‘west. There is free parking at each end. The eastern half passes by a beach and crosses dunes. There are plenty of benches along the way to sit and rest. The western half passes along the stone breakwater. Visitors can return to the boardwalk or explore the shops and restaurants along Main Street.