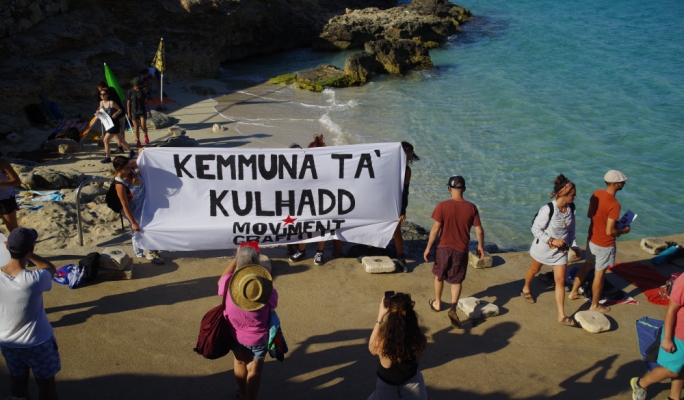 Moviment Graffitti is once again removing the empty deckchairs and parasols from the Blue Lagoon and this time inviting the public to demonstrate with them.

The NGO will hold a public protest at Blue Lagoon on Saturday August 13, saying the beach “continues to be hijacked by commercial interests”.

“We will not accept a situation where a few people with money and political influence take over what rightfully belongs to the people. Nor will we accept that these corporations continue to destroy a nature reserve for their profits. private,” the NGO said.

The activists will demonstrate with four essential demands: deckchairs and parasols can only be installed at the request of a person physically present on site (and must never occupy more than 30%) of them; large boats that disembark hundreds of tourists at a time are prohibited in Comino; a limit of two small kiosks without music in the Blue Lagoon; a restriction on the type and amount of waste generated.

Last month, activists and members of Moviment Graffitti launched an early morning direct action on Comino, protesting private concessions blocking access to the public coastline. Activists removed the laid out deckchairs and neatly folded them against a retaining wall.

Deckchairs and umbrellas have taken over Comino’s Blue Lagoon for many summers. A petition in 2021 asked MPs “for the removal of deckchairs and deckchairs from Comino”, gathering more than 600 signatures.

Deckchairs are placed on every inch of the shore – pier, beaches and rocks – before the first tourist boats arrive, by private vendors who treat the Blue Lagoon like their own personal beach lido.

While the NGO has made repeated requests to ministers on the issue, the beach continues to be invaded by empty deckchairs and parasols.

Tourism Minister Clayton Bartolo said he had issued an order that no umbrellas or deckchairs be placed on the sandy beach, but Moviment Graffitti claimed otherwise.

The NGO said only a few deckchairs on the small sandy part of the beach had been removed. The rest of the area, including the quay, the walkway and another small beach, was still covered in empty sunbeds and umbrellas from the early hours.

Those interested in joining the event can reserve their place on the boat via an online registration form. The boats will leave for the Blue Lagoon from Ċirkewwa or Mġarr (Gozo) at 8:00 am. There will be several round trips starting at noon.