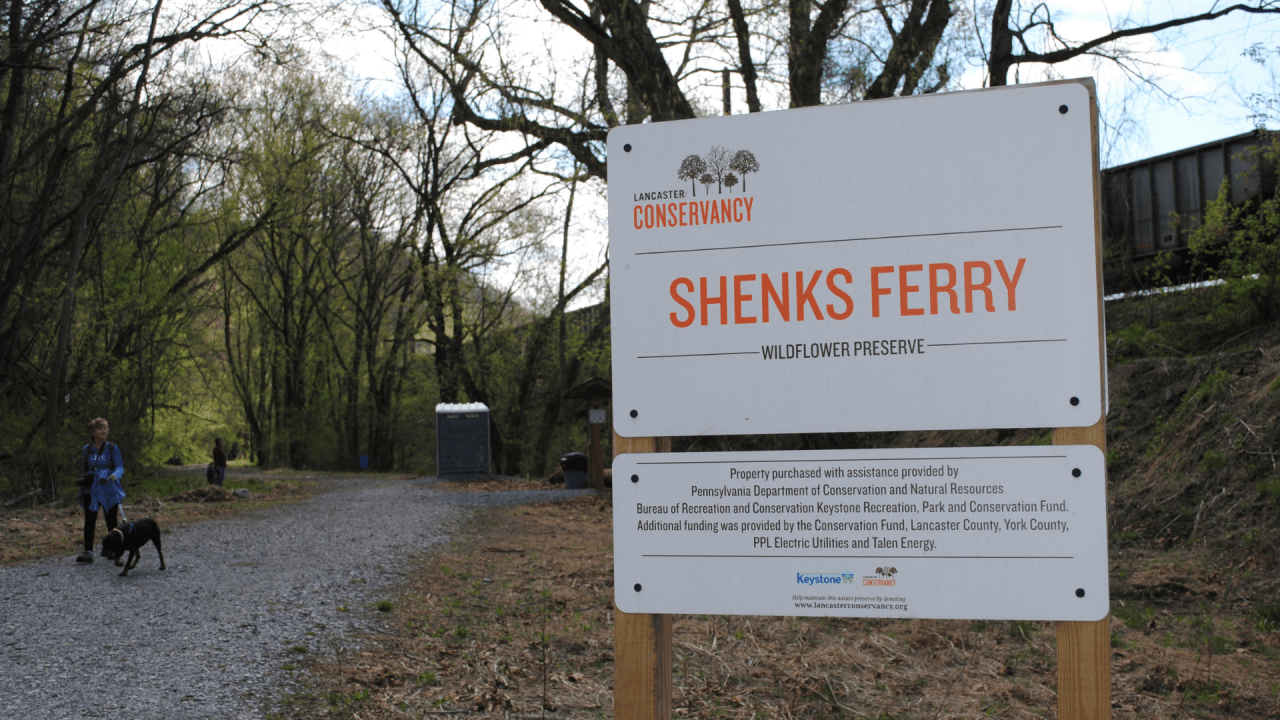 CONESTOGA, Pa. (WHTM) – Shenks Ferry is known for its wildflowers, but it’s also home to a good deal of local history.

From culverts along the Enola Low Grade train line to the remains of a train wreck to a plaque commemorating the explosion of a deadly dynamite factory, Adam Zurn, local history buff and founder of Uncharted Lancaster, knows the stories behind Shenks Ferry.

The Enola Low Grade Railroad line was built in the early 1900s by the Pennsylvania Railroad, according to the Susquehanna National Heritage Area. The railway line was built with no more than a one-degree elevation change or a three-degree turn along the entire route, Zurn said.

The reason for this very specific criterion was economic, Zurn explained. Climbing and descending hills and sharp turns require braking and accelerating, which takes time and wears down equipment.

â€œTime is money, so the faster we can get it from point A to point B, the more money we can make or save,â€ Zurn said.

Of course, the natural landscape is not built to meet these criteria. So, during the construction of the Enola Low Grade Line, the hills were destroyed to make way for the railroad and the valleys were filled in to maintain a constant elevation, Zurn explained.

When the valleys were filled in, stone culverts were built to allow water to flow through the valleys. These culverts are still standing in and around the Shenks Ferry Wildflower Preserve.

In fact, one of the culverts is along the main Shenks Ferry trail. Culverts look like tunnels, although Zurn explained that some people say there is a difference – culverts are crossed by water, unlike tunnels.

Explosion of a dynamite plant

Blowing up mountains to make way for the Enola Low Grade railway line required a lot of dynamite. For easy access to explosives, a dynamite factory was built at Bausman’s Hollow near Shenks Ferry, according to Zurn.

The plant operated for over two years, supplying dynamite first for the construction of the Enola Low Grade and then for a nearby dam construction project. On June 9, 1906, an explosion at the factory killed 11 men and injured several others.

No one knows exactly what caused the explosion, but Zurn has a theory.

â€œTradition has it that you build a new dynamite factory every 1 to 2 years because the explosive powders settle on the ground and on the walls, and the longer you let the building go, the greater the likelihood of an accidental explosion. premature is high. â€Zurn mentioned.

The Lancaster Inquirer called the explosion “the most horrific disaster in this county in recent years.”

Precious trash: a visit to the white cliffs of Conoy

The 11 people who died in the explosion are buried at United Methodist Church in Colemanville.

People 15 miles from the plant said they heard the blast, meaning people north of Lancaster City, people in York County and people in Maryland could have heard it, Zurn said.

The shock wave from the explosion was felt for a mile and a half, Zurn said. Newspapers at the time reported that people’s windows and dishes were breaking. Zurn said a barn had even been dislodged from its foundations.

In the immediate vicinity of the plant, the leaves of the trees were torn off and, according to The Scranton Republican newspaper, “huge holes were dug in the ground”.

Today, a plaque in the Shenks Ferry Preserve marks the site of the explosion.

Remains of a train wreck

Decades later, the people of Conestoga believed they heard another dynamite explosion one December evening. In fact, what they heard was the sound of a freight train hitting a rock that had fallen on the tracks a short distance outside of Shenks Ferry.

“On December 23, 1981, Bill Neway discovers the answer to what happens when a stationary object is struck by an unstoppable force,” Zurn said.

In a first team of all-female locomotives, runs the Strasburg Rail Road train

An 82-car train designed by William Neway was heading for Bucks County when it came across a huge boulder in the tracks. Although the train crew tried to brake, there was not enough room for the train to come to a complete stop before hitting the giant boulder, Zurn explained.

The train collided with the boulder traveling at about 30 miles per hour, and the first carriages on the train bent back and forth like an accordion.

Fortunately, the train was carrying freight rather than passengers, so there were only four people on the train, and they all survived the crash. Neway was injured in the crash and retired on disability after the event, Zurn noted.

Zurn reported a few metallic remains from the crash that are in the woods off the Enola Low Grade Trail.

â€œI think what’s really amazing is that you come here and you’re like, ‘Oh wow, there’s this beautiful wildlife preserve and there’s all this nature’, but there’s so much more here. , sometimes a few feet from the trail or hidden around the corner. â€Zurn says.

Visitors to Shenks Ferry should stay on the trails to avoid harming the wildflowers and other wildlife living on the reserve. Guests should also make sure to remove any trash or other items they bring to the storage room. The site is take out, take out, which means that there are no bins in the reserve.

More information about the reserve is available on the Lancaster Conservancy website here.

May 26 – Camp Scott Nature Reserve has an interesting past | Fwbusiness