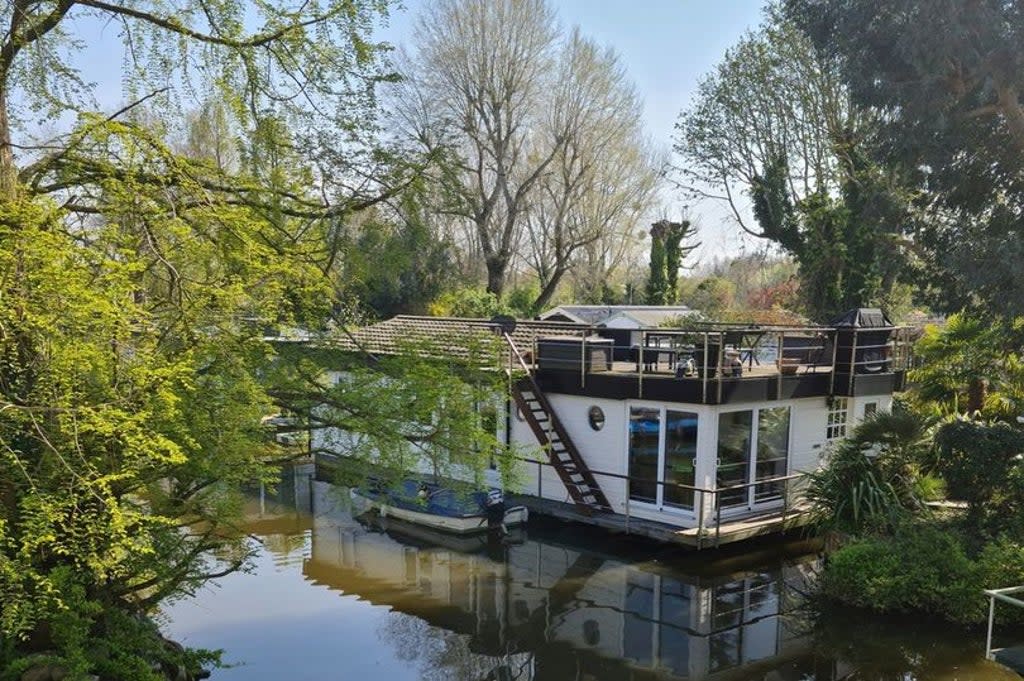 Extraordinary floating home on a private island in the Thames up for sale for £545,000

A rare chance to escape and join one of London’s creative colonies comes in the form of a floating island for sale on the Thames.

Taggs Island, named after 19th-century shipbuilder Thomas Tagg, lies half a mile upstream from Hampton Court Palace and is home to a community of 62 floating homes owned by artists, writers and musicians. David Gilmour of Pink Floyd bought one in 1986 and converted it into the Astoria floating recording studio.

For sale now is The Boathouse, one of the largest houses on the island – a three bedroom houseboat with roof terrace and private garden located in a calm lagoon. It has a price tag of £545,000, through Water Side Residential.

The Water Side residential listing says: “Taggs Island is accessible from the Hampton shore and is within walking distance of the main train station and the many nearby bars, cafes and restaurants as well as the historic Hampton Court Palace. “

Boatbuilder Thomas Tagg moved to what is now Taggs Island in the mid-19th century and turned the island into a vacation spot for British high society.

The island fell into decline after the First World War, but in the early 1980s the center of the island was dug out to create a lagoon, which made room for more houseboats.

Today, the island’s houseboats are a mix of architectural styles. No new houses can be built on the island and it is one of the only islands in the Thames accessible by road bridge. The Boathouse comes with a 20-year renewable license which would cost around £10,000 a year and includes bridge maintenance costs. Each houseboat on the island has an assigned parking space.

Many of the island’s houseboats are in the upmarket bracket, such as a modernist five-bedroom houseboat that went on the market for £1.85million. It had a 3,000 square foot glass pavilion and came with a 125 foot riverside mooring

However, occasional bargains crop up for those looking to climb the floating property ladder. Last year a two-bedroom houseboat went on sale for £375,000 with a roof terrace, garden and 20-year berth permit.