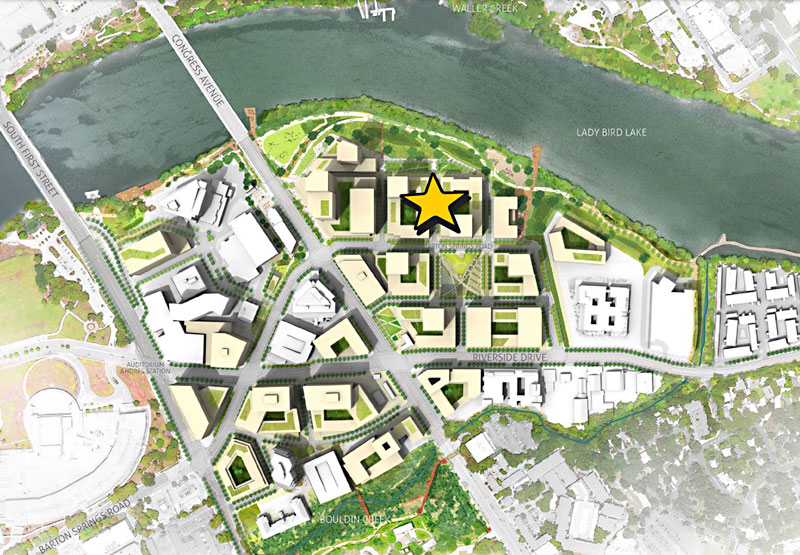 Austin at Large: Storms Along the Waterfront: How Much Should the City Invest in Statesman PUD? Zero, or 400 million dollars? – New

A visualization of the 2016 South Central Waterfront plan. Statesman PUD, marked with a star at the top center of the map, offers 3.6 million square feet of construction, which means buildings much larger than those considered here. (Image via austintexas.gov)

And now we’re back at 305 S. Congress, the former home of the Austin American Statesman, the place we used to call the Batcave. The owners of this 13-acre site – the very wealthy Cox family of Atlanta, who sold the newspaper themselves in 2018 – have teamed up with Endeavor Real Estate Group to create a $2 billion redevelopment (now called the Statesman PUD, for the development of planned units) if the city agrees. In April, the Planning Commission and Council agreed – the latter at first reading – but with numerous amendments and strong community pressure on Endeavor and its agent, Richard Suttle, to do better, mainly on the affordability.

Endeavor can indeed do better; Suttle hinted that the developer could buy existing apartments in the South Central Waterfront area and make them affordable, so he could sell the posh condos he plans for the Batcave at the best price. But Endeavor’s response to community pressure so far has been to advocate for city funding to help provide community benefits, because without it their plan to maximize property values ​​at the Statesman the site (and the city’s future tax revenue) isn’t taking shape right now, at the top of the market and with prices and construction delays sprouting like weeds.

In 2020, the city paid ECONorthwest, a Portland company with a good reputation in affordable housing circles, to test Endeavor’s claims that this prized land is a focal point of Austin’s culture – where Downtown meets SoCo – is not possible to build without help from the city. They said he had audited, to the tune of about $140 million, which ECONorthwest says could be resolved as market conditions improve (remember, this was six months after the beginning of COVID).

Well, they have certainly improved! Thus, at the April 7 meeting, the Board requested an update of this study to assess the Statesman PUD, with all the community benefits offered and required so far, plus the six proposed changes that had a price. The Housing and Planning Department reached out to its go-to consultant, Economic & Planning Systems of Oakland, which has worked with the city on deals like this one in Austin since the 1990s.

And guess what they found? In a 23-page memo written earlier this month, EPS says the funding shortfall has grown, not fallen, as construction costs have ballooned; the unsatisfied part of the price is now between $238 million and $400 million. The three amendments asking for infrastructure – mostly extending Barton Springs Road into the site, which is also the southern end of Project Connect’s Blue Line bridge – cost $28.7 million. And demands for affordable housing further widen the gap; the most expensive of these, imposed at first reading by Council member Kathie Tovo, will cost an additional $266 million.

Are you thinking, “WTF? Is this thing going to be built of pure gold? What could justify the city taking the value of an entire real estate bond to spend from the hands of a wealthy developer?And how is it possible that a 3.6 million square-foot project – that’s about 6.5 Frost Bank Towers – in Austin, right on the lake, right now, can’t make a profit?” But you might also be thinking, “That looks really cool!” Is it on the Blue Line? How long before I can live there? »

Remember that part of the problem – which I wrote about earlier this year – is that the south central waterfront was never properly landscaped or supplied with utilities, drainage, internal roads, etc. it was all a floodplain until the construction of the Longhorn Dam in 1962, and no one really knows what lies beneath the Batcave parking lagoon. This means that the money has to be spent just to bring things up to code, so to speak. Overlapping this is the projects included in the South Central Waterfront Community Vision Plan adopted by the city in 2016. It wouldn’t be strange for the city to pay for some of that; that’s why PUD zoning cases are all negotiations, all transactions.

Late last year, the city planted the seeds of a nascent public-private partnership, officially establishing a tax-increase funding district for the South Central Waterfront, but setting the increase at 0% (it may modify it at any time). It is the percentage of tax revenue generated within the SCW that would be set aside to cover the cost of the city’s share of the infrastructure, rather than flowing into the general fund. This is what the city has done at Mueller and Seaholm – the latter being comparable in area, if not in scale, to the Statesman PUD – but it had these properties. Again, the wealthy own the Batcave who could afford to cover the nine-figure gap between Endeavor’s funding and the city’s demands.

Suttle argues that the remaining tax revenue from the Statesman The PUD, beyond the increase, will be as high as it could be, and not subject to state-imposed income caps, and that alone should be worth a townskin in the game. the other side, Save Our Springs Alliance leader Bill Bunch in a letter to the Austin Monitor that he shared with the the Chroniclecalls the EPS analysis “absurd” and “worthless”, adding: “Its whole premise – that the highest dollar real estate in [Texas] somehow just can’t make a profit without the help of taxpayers, that’s ridiculous.” Maybe they’re both right? We’ll see what the Board decides .

Do you have something to say ? The the Chronicle welcomes opinion pieces on any topic from the community. Submit yours now at austinchronicle.com/opinion.