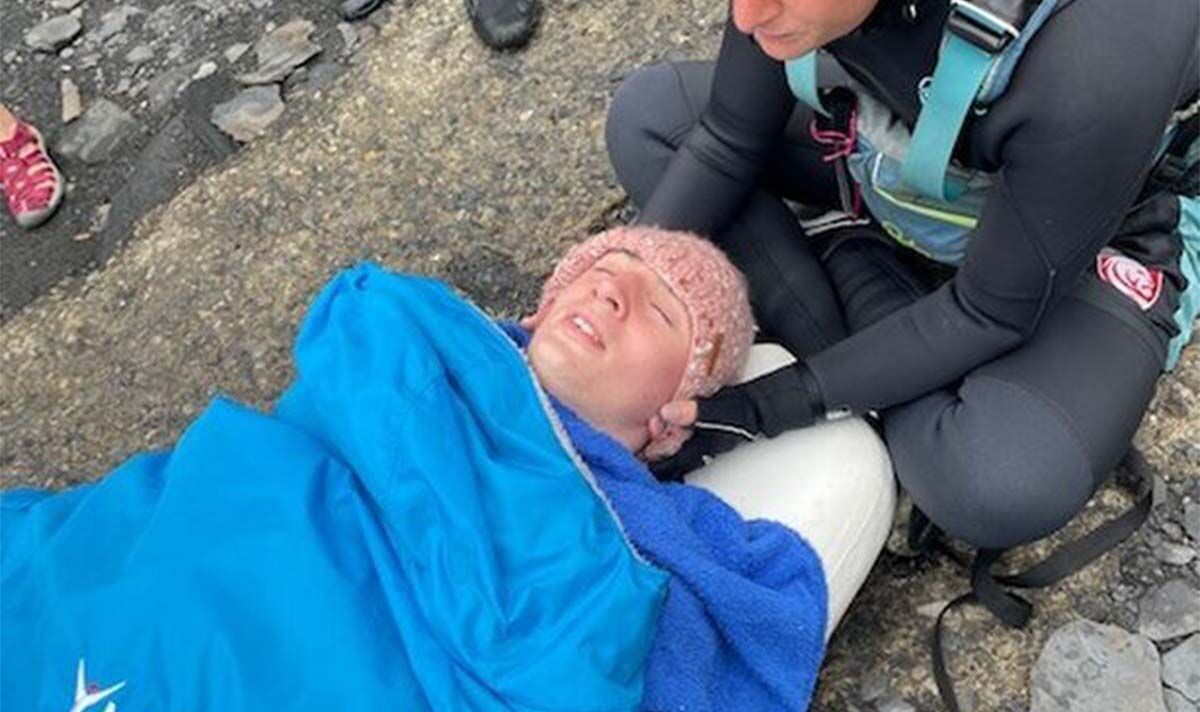 With the return of warm weather, people will be looking for ways to soak up the sun and cool off. However, a mum is warning others to be careful after watching her son fracture his spine as he fell in Wales. Tombstone (or cliff jumping) involves jumping with an upright posture into the sea or another body of water from a height, such as from a cliff or bridge.

Lindsay Wilson was vacationing in Wales with her family last week when they decided to head to the Blue Lagoon. The Abereiddy site in Pembrokeshire is a former quarry that has long been a popular spot for those wishing to leap from its high slate walls into the deep waters below.

The 41-year-old NHS worker from Bradford said her son Sam had already taken the plunge over 30ft once and, after coming back up to jump a second time, she pulled out her mobile phone to film him.

However, speaking to WalesOnline, Lindsay added that she knew something had gone wrong shortly after she emerged from the water, after hitting the surface hard in a “lightly seated position”.

She described seeing the 16-year-old as having “turned pale” as he clung to the rocks in obvious distress.

“Sam is a big 16-year-old boy and a fantastic swimmer, so we didn’t think anything was going on initially,” said Lyndsay, who was later told the impact of that height was tantamount to “bumping on concrete”. There were others in the lagoon at the same time and we just thought he was just waiting for them to come out first.

“But then we could see that he had turned pale and was clinging to the rocks.” She added that a woman called Tessa from Celtic Quest Coasteering, a local outdoor adventure group who had also been in the water, swam to Sam.

“She put him on his back and, using a paddle board as a makeshift stretcher, a few of them swam him to shore. We are so grateful to them for doing this. , I can’t imagine what could have happened otherwise.”

The teenager was then airlifted away from the cliffs by a Coastguard helicopter to a waiting ambulance before being transferred to Carmarthen Hospital later that afternoon (Tuesday August 2). There, consultants sent Sam for a CT scan which showed he had a broken spine that would require him to wear a body brace.

“When he was first checked he must have still been in shock because he told the doctors he had no pain in his back – so it’s a good job they were so thorough and insisted on having him scanned,” Lindsay added. “We just hope the injury will heal on its own over time and he won’t need surgery.”

“In the meantime, my dad and I are sleeping on his bedroom floor to make sure he has everything he needs if he wakes up in the middle of the night. He should be enjoying his summer school holidays by Right now, instead, he’s in terrible pain and can barely move.

“I just want to make sure everyone realizes the risks of this stuff and that no one else has to go through what we went through. But, given that there were still children jumping from the ledge in the water after Sam had his accident, I’m afraid this warning will fall on deaf ears.”

fun amenities you can access without breaking the bank