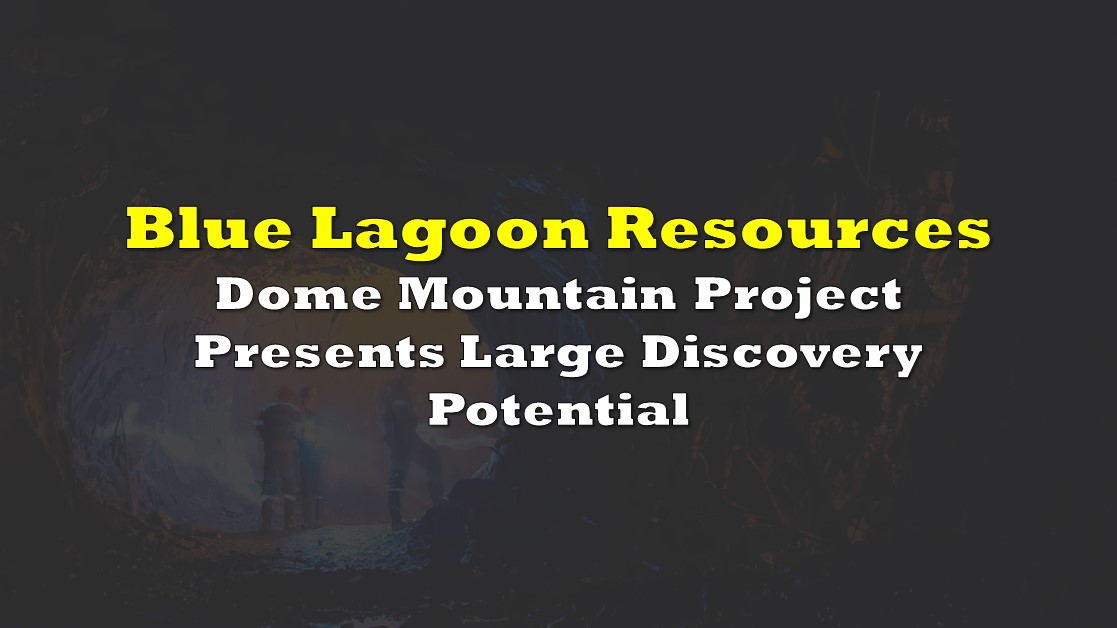 The Dome Mountain project holds both an Environmental Management Act (EMA) license and a mining license for up to 75,000 tonnes of annual production. The property is home to the former Dome Mountain gold mine and has 15 known high-grade gold veins, including the high-grade Boulder vein which has attracted most historical exploration activity. 90% of massive property is still unexplored. Blue Lagoon has generated modest revenue from the sale of mineralized material from the mine, which helps offset some of the company’s operating costs.

The Dome Mountain property has attracted the attention of serious precious metals investors, including strategic investor Crescat Capital and its chief geological and technical director, world renowned geologist Dr. Quinton Hennigh. Hennigh has carefully analyzed the potential of Dome Mountain and believes that the project has much greater discovery potential than the Boulder Vein alone, the area of ​​the property on which historical drilling programs have focused.

Additionally, Hennigh has publicly stated that the vein systems at the Dome Mountain property appear to be geologically nearly identical to those at the Buritica mine in Colombia, South America. Burtica is owned and operated by Zijin-Continental Gold and is initially expected to produce 240,000 ounces of gold per year. These vein systems are open at depth, and if Dr. Hennigh is correct, Dome Mountain has the potential to become a major gold deposit.

In 2021, Blue Lagoon drilling discovered a new vein system they call the Chance Structural Corridor. This month, the company announced that a recent drill hole in this structure encountered a new high-grade vein that returned assay values ​​of 14.8 g/t gold and 38.3 g /t of silver over 7.3 meters, as well as a second vein further down the hole which returned 26.9 g/t gold and over 100 g/t silver over 1.04 meters.

Blue Lagoon will dedicate one of the drills to the Chance structure to monitor this development, and the other drill will continue to monitor previous holes with step-out and fill-in drilling. The objective of this drilling is to further delineate the size and extent of the vein systems emanating from the Boulder Vein along strike and at depth.

The estimate represents a 145% increase in indicated gold resources over the report prepared by the previous owners, and overall the new report shows contained gold ounces increased by 30% and gold ounces 46% silver. These numbers came from only a small portion of the property. As drilling progresses on new targets and returns high-grade intersections, management believes that the resource calculation may increase significantly, which will be important for the project’s progress towards pre-feasibility.

Blue Lagoon Resources is well capitalized with over $4 million in Treasury. Currently, there are also in-the-money warrants that could yield an additional $4.5 million when exercised, which would provide the company with sufficient cash to execute its exploration programs. BLLG has 88.78 million shares outstanding and a market capitalization of $48.83 million.

The company is currently actively exploring with two drill rigs that can operate 24/7, all year round. The Dome Mountain property appears to have significant upside potential, and if future exploration programs find a significant discovery and/or many veins can be linked to an overall large high-grade deposit, this could attract the attention of a larger mining company. seek to bring the property into production and therefore offer Blue Lagoon shareholders a lucrative exit. In the meantime, the sheer size of the Dome Mountain property suggests that a steady stream of news can be expected as the property continues to progress.

Blue Lagoon: High-quality resource is ‘tip of the iceberg’ – The Daily Dive