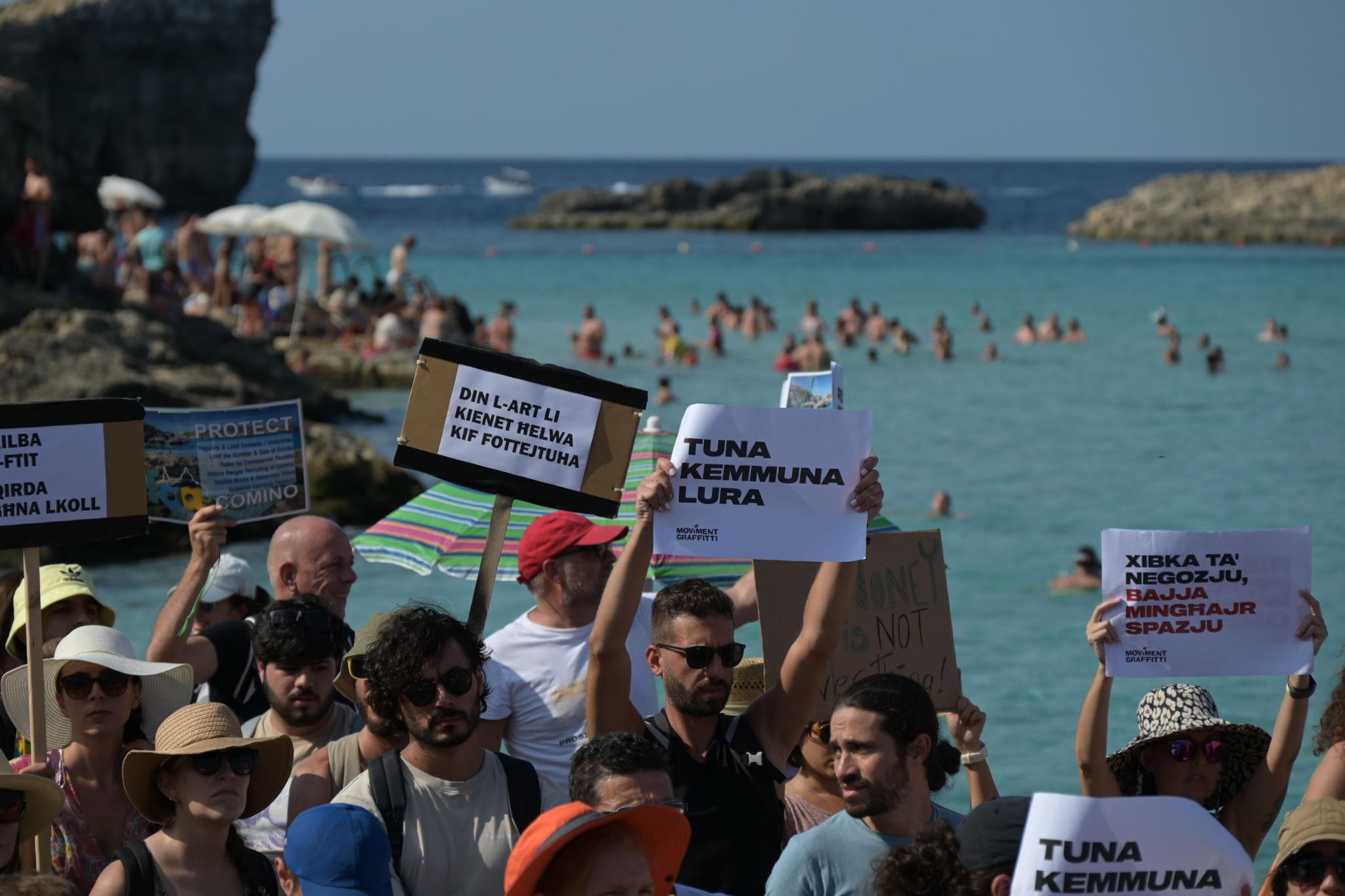 Moviment Graffitti’s second protest action in Comino’s Blue Lagoon in as many months began somewhat anti-climactic on Saturday, but arguments quickly erupted when commercial operators of the bathing spot insisted on keeping their furniture from beach on site – and the police officers present supported them.

Activists initially found the area largely devoid of rental sunbeds and umbrellas which for a long time virtually transformed the site into a private lido and made the Blue Lagoon the most notoriously overcrowded swimming spot in the country.

But as activists insisted they had informed the police of their protest action – as a result a significant number of police were on hand – and had agreed that beach furniture would be removed during the protest action , a number of Maltese sunbathers insisted on staying put with beach furniture eagerly rented by the commercial operators targeted by the dispute, and the mood quickly heated up.

Speaking to other activists, André Callus of Moviment Graffitti insisted that the presence of swimmers on the day of the demonstration was no coincidence. Unlike the June protest, this one had been publicly promoted in advance, with the NGO organizing boat trips from Malta and Gozo to entice the public to join them.

“Just yesterday we were informed from various sources that the deckchair suppliers would seek to sabotage our action today, by bringing their own people to occupy the space themselves. And that’s what’s happening: the people you see here came with that goal in mind.

Callus said the NGO informed the police, warning them that such actions could cause trouble, but added that the police always ultimately bow to business interests and “bullies who think they control Malta”.

Police insist rented deckchairs must not be removed

Police on the spot refused to allow the activists to clear the site, with one officer insisting the activists could not leave people out in the sun as there might be ‘vulnerable people among them’.

‘It was your responsibility,’ Callus retorted, but the officer insisted the deal the activists made with the police only covered the time of their arrival, not the duration of their presence the low.

The NGO has made four essential demands, in particular that the rental of beach furniture should only be installed at the request of a client physically present on site, and should in no case occupy more than 30% of the surface. He also called for a ban on larger boats from disembarking hundreds of tourists at a time, limiting the number of kiosks to two – both banned from playing music – and limiting the waste generated. Objectionable waste included the use of hollowed-out pineapples as cocktail glasses, with campaigners pointing out that discarded pineapples were tossed indiscriminately and left to rot, attracting pest rats to the birds that nested on the island, a Natura 2000 site.