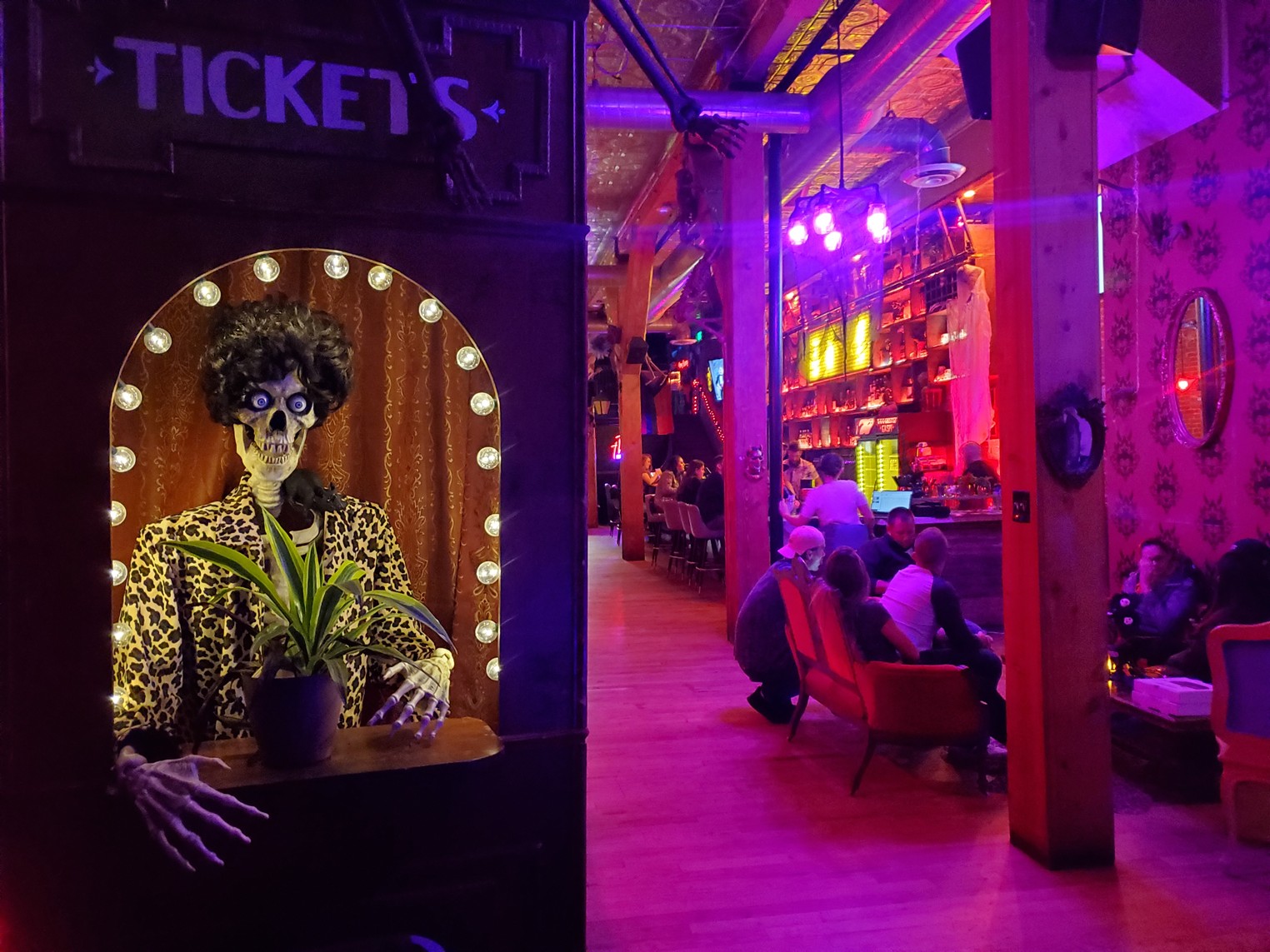 The Best Halloween Bars in Denver

It’s officially spooky season, and the bars of Denver are getting into the spirit. From pop-ups to must-haves that embrace all of Halloween, these are the places to visit if you’re looking for spooky decor paired with seasonally-inspired cocktails.

Adrift
218 South Broadway
720-784-8111
One of the best tiki bars around recently launched its seasonal fall cocktail menu with options like the seasonal daiquiri, made with three types of rum plus allspice, cinnamon and lime, and the Oh My Gourd!, a pumpkin-based whiskey cocktail. Stop by for Red Rum Wednesdays, when the bar offers even more specialty cocktails and is bathed in red lights, with scary movies in the background. On October 29 from 8 p.m. to midnight, Adrift will also be hosting a Freaky Deaky Tiki Party, featuring a costume contest, drag show, fire shows, tarot and fortune card readings, special Halloween cocktails and more. Tickets are $25 in advance and $30 at the door. Black Lagoon at the Yacht Club
3701 Williams Street
This immersive pop-up with many macabre elements will be open at the Yacht Club from October 17 to 31. Created by bartenders Erin Hayes and Kelsey Ramage, Black Lagoon is filled with gothic swamp-themed decor, including hanging vines, bloody tombstones and body parts, and spooky movies projected onto the wall and many dark and delicious cocktails. The six-drink menu features a list of carefully curated concoctions such as the Blood Rave, a smoky, earthy blend of mezcal, tequila, Cointreau, lime and beets, and the bubbly Lillith’s Cup, with two types of rum. , white vermouth, Aperitivo, passion fruit and edible flakes. Honor Farm pays homage to the spooky history of its building.

This new bar took over the short-lived Pueblo-themed Fuel & Iron on October 7. Named after a place in Pueblo with its own spooky past, the new concept from the team behind Edgewater bar the Electric Cure is filled to the brim with ghosts and ghouls, playing out the building’s history, which includes stories of a ghost named Lydia who haunts the place. It’s not a pop-up, though: Honor Farm’s scenery is permanent. The space’s mezzanine is also home to Hell or High Water, a gay pirate ship-themed tiki bar.

A giant skeleton oversees the creepy proceedings at the mansion.

The Mansion on Colfax
1509 Marion Street
303-862-4731
Earlier this year, new owners took over Kinga’s Lounge, transforming it into the Mansion, a concept that honors the building’s history, which includes stories of a Prohibition-era speakeasy in the basement and of a former landlord who supposedly committed suicide in the basement after discovering that his much younger lover had cheated on him. Legend has it that his ghost still haunts space, along with several others. In October, the mansion is particularly spooky, as it has been temporarily transformed into a haunted pop-up, complete with an extra-tall skeleton, a prostitute skeleton, IV bags full of “blood”, bats galore and no more nods to the strangeness of the building. past. the brilliant is the inspiration behind the Hotel Monaco pop-up.

This downtown hotel’s former on-site spa has been transformed into a tribute to the brilliantThe infamous Gold Room at the Overlook Hotel. The bar area features a maze-like hallway filled with specialty props and pieces, like the haunted bathroom in room 237. On the menu, bourbon-based cocktails and movies like Elevator Music and Heeeere’s Johnnie! ! and light bites reminiscent of key moments in the movie, like jerky elk, charcuterie, and fries with homemade ketchup. The hotel also offers a Nightmare in the Mile High package that includes two tickets to Elitch Gardens’ Fright Fest and $30 Uber credit. The bar is open from 5:30 p.m. to 11 p.m. Thursday to Saturday until mid-November.

Slashers has a year-round horror theme.

Dark lighting, dark art installations and nightly screenings of horror movies are the norm at this horror-themed bar, but it adds an extra dose of creepiness for the Halloween season. with more decoration and new seasonal cocktails. The Slashers will also be hosting a Halloween party on October 29 with a costume contest, live music and a screening of Halloween III: Season of the Witch. The team behind Slashers have brought their pop-up Halloween bar back to a new location this year – Tony P’s in the Highlands neighborhood. The bar is open from 4 p.m. to midnight on weekdays and from 2 p.m. to 2 a.m. on weekends; expect plenty of skulls, ghouls, and party cocktails.