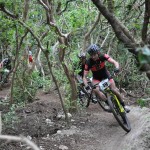 The 2014/2015 Flying Colors Mountain Bike Race Season Series continued on Sunday [Dec 29] with 101 runners on the course around Lagoon Park.

In the veteran men’s race, Dexter Swan clocked a winning time of 41:08, Gary Raynor finished second with a time of 43:15, both riders completed 7 laps, while Anthony Spence finished third with a time of of 43:16 by completing 6 laps. Karen Smith was the only veteran women’s division competitor to record a time of 41:18.

In the men’s novice race, Gabriel Wilkinson crossed the finish line first with a time of 33:16, Tim Miller was second in 35:52 and Shane Mora was third with a time of 36:56.

Escape to a paradise without children