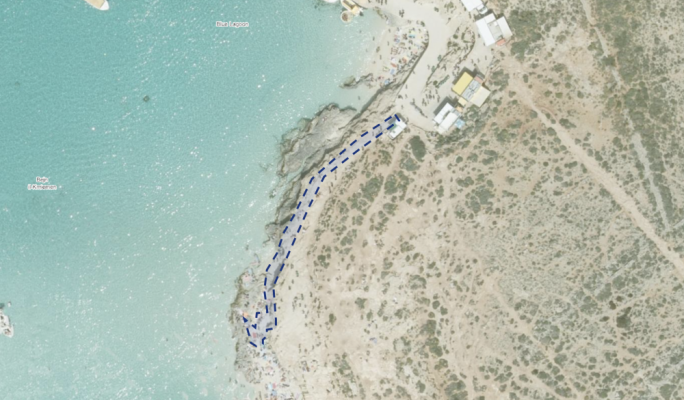 The Gozo ministry wants a 71m long walkway with safety railings linking the two beaches in the Blue Lagoon area, citing the need to keep the beach “safer for all demographics”.

Moviment Graffitti, whose campaign to reclaim Comino’s coastline has captured national attention, has expressed skepticism about any infrastructural intervention on the protected nature reserve, ahead of a long-promised holistic plan to protect the island is implemented.

The request comes at a time when Comino’s review is under increased scrutiny, following Graffitti’s protest against abusive tanning bed operators and highlighting the need to control tourist numbers and boats on the island, as recommended in the Natura 2000 site management plan approved six years ago. .

The ministry’s PA application, filed by architect William Lewis, provides for a footbridge connecting the Blue Lagoon to another beach near the existing stairs, which will also be repaired. The project will include a 59m balustrade along the path, while the wooden walkway will be removable and fixed on adjustable feet to minimize the impact on the natural terrain.

A ministry spokesperson told MaltaToday that the walkway will provide a direct connection between the official footpath leading to the Blue Lagoon and the directly adjacent beach. “Currently, the latter is not safely accessible to beachgoers due to aggressive terrain,” the spokesperson said, adding that the walkway would not encroach on the natural environment while making access at bay “safer for all demographics”.

The intervention has already been approved by the Environment and Resources Authority through a nature permit issued in 2019. But a full planning application has been submitted to ensure ‘wider public consultation’ on the issue, the ministry spokesman said.

The temporary walkway will be constructed using iroko wood decking and wooden balustrade to ensure optimum security, similar to a walkway installed in Ramla il-Hamra, Gozo and other bays in Gozo and Malta.

Graffitti insists on the need for a holistic plan

Comino still lacks a comprehensive plan to control the number of visitors and boats as proposed in the Natura 2000 site management plan.

One of the main contributors to the deterioration of the area is the deposit of tons of waste, including hundreds of “cocktail” pineapples dumped in the area around the beach every day.

In the absence of a comprehensive plan to address this issue, Moviment Graffitti has expressed skepticism over the latest infrastructure project. “What we have seen over the years is a series of piecemeal and environmentally damaging interventions designed to accommodate commercial activities such as trenching works passing utilities for kiosks,” Graffitti said.

He said such infrastructural interventions, which included trenching works for the passage of utilities, have simply led to increased commercial activities which are suffocating the Blue Lagoon. “In this case, it looks like the platform will connect the main Blue Lagoon beach to another small beach which is completely occupied by sunbed operators.” The NGO pointed out that after the direct action taken last month, Tourism Minister Clayton Bartolo ordered the removal of deckchairs only from the small sandy beach. But the whole surrounding area, including this adjacent beach which will be linked via this platform, remains “a de facto private lido controlled by deckchair operators”.

Graffitti warned that in practice, “the platform will continue to welcome deckchair operators by facilitating access to an area controlled by them”.

Graffitti remains outraged that Bartolo twice refused to answer a parliamentary question about the composition and work of the committee that is expected to develop Comino’s holistic plan. “The committee has served as an excuse for the minister to justify his inaction by stating that he is still awaiting the committee’s assessment. In fact, it may well be that this committee does not exist at all since Minister Miriam Dalli’s answer to the same parliamentary question indicated that this committee was not yet constituted”.

Graffitti reminded the government that the Comino management plan in place since 2016, specifically referring to the need to establish carrying capacity for the island, has been in place since 2016, “no action has been taken to implement it. Instead, the government allowed and facilitated the takeover of Comino by business interests such as sunbed operations, tourist catamarans and seven massive kiosks.