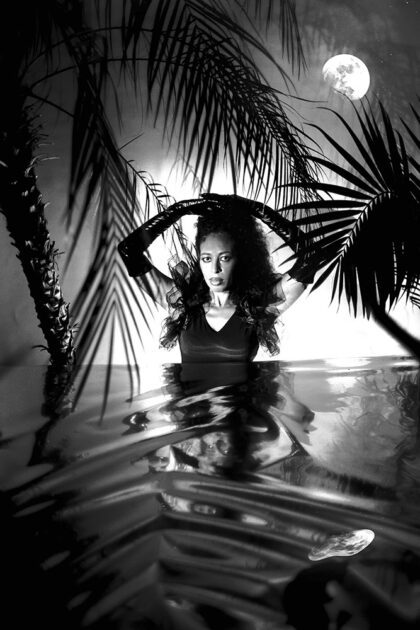 Jamaica’s Blue Lagoon is a sapphire tidal basin fed by ocean and freshwater springs. Its cinematic surface was brought into popular consciousness by the 1980 shipwreck romance film of the same name. In the film (which was actually shot in Fiji), its shores are deserted, but the real lagoon is anything but its depths which are home to diverse aquatic life and Afro-Caribbean history. Four generations of the Hoyes family have lived in Portland, Jamaica amid the tropical lagoon ecosystems. Between music and spoken poetry, Candice Hoyes’ four-track EP, Blue Lagoon Womanretrieves the monument’s Indigenous lineage and natural history from colonial pop culture narratives, digging “a puzzle piece into [Hoyes’s] origin story that has been eroded by time, immigration and repression.

On his first album, On a turquoise cloud (2015), Hoyes offered thirteen renditions of songs written primarily by Duke Ellington and Billy Strayhorn. Her voice simmers and soars in the vein of Billie Holiday and Sarah Vaughan, the recordings showcasing not only her lyrical training, but also scintillating arrangements of piano and brilliant horn performed by a group of musicians affiliated with Wynton Marsalis and at the Jazz at Lincoln Center Orchestra.

Hoyes now carries that same great voice into the realm of speech and soul. Her new EP harnesses the black joy and technology of black American music to speak of ecological sustainability and divine femininity with the lyricism and dynamism of iconic 1970s soul: Marvin Gaye, Roberta Flack and Gil Scott-Heron being the ancestors of the Hoyes style. On Blue Lagoon Woman, she collaborates with a collective of musicians and producers to create her sound, including Natasha Diggs, who provides the remix of the album’s final track, “Zora’s Moon”. Hoyes forges the depths of collective, family and sonic heritage by composing pop music for a decolonized future.

In four songs, Hoyes takes us through the history of black American music from 1920 to 1998: the album opens with an Afro-futuristic jazz interpretation of SWV’s late 90s soul-pop hit, ” Rain”. French horns and vocoder flourish over a tight rhythmic hold of electro-percussion and electric bass before morphing into “Body Whorl”, a spoken poem about transatlantic migration and the life of the conch shell. Hoyes’ “Waiting for the World (Tired)” offers a rolling and moving rendition of Langston Hughes’ poem, “Tired,” which urgently calls for a reckoning with racial injustice. His pulsating drums and bass lead to “Zora’s Moon”, a tribute to the life and work of Zora Neale Hurston.

From start to finish, the album spans vast sonic territory in the jazz and soul archives, evoking, for example, a powerful mid-1970s session with Anthony Braxton that swirls in a rain of vibraphone roaring the rooftop of a Manhattan cab after a night of dancing R&B in the smoky lounge at Nell’s. Like the layered undercurrents of the original Blue Lagoon – cold salt water drifting with the tide, swirling with streams of warm, golden freshwater with leaf tannins upstream – the analog textures and emancipatory visions of Candice Hoyes Blue Lagoon Woman are surprising, layered, elemental and profound.

Blue Lagoon: High-quality resource is ‘tip of the iceberg’ – The Daily Dive