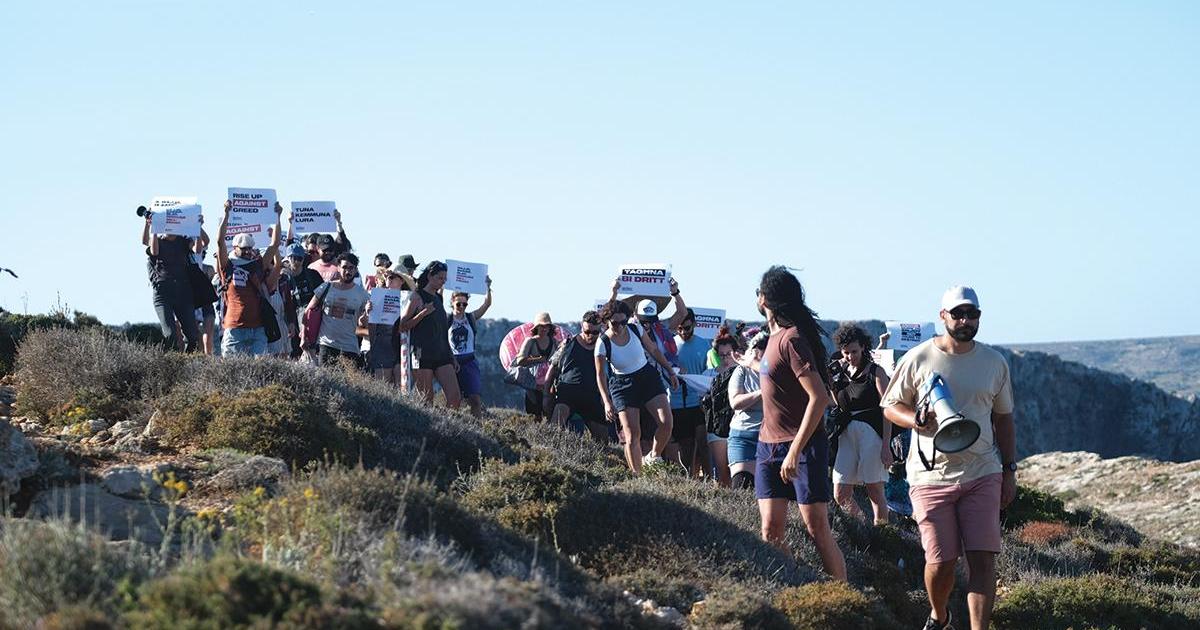 Comino Tower was built by Grand Master Wignacourt in 1618 to house a modest garrison that would hold off Barbary corsairs who approached the island to hide in its caves and from there attacked the transport crossing between Malta and Gozo.

Four hundred years later, piracy returned to Comino but not from the Barbary coasts. The new pirates are locals, and instead of scimitars and arquebuses, they’re armed with umbrellas, lounge chairs, and other beach paraphernalia. They come to take over the public space of Blue Lagoon for their own illegal and lucrative activity. Every summer, it’s the same story: the whole beach is covered with deckchairs rented at exorbitant prices, the public complains, the media reports, and yet no one in authority seems to be listening.

Graffitti’s ‘Raid on Blue Lagoon’ was spectacular and deserves to be remembered with a spectacular name. What made it even more so was the public approval that followed.

Graffitti has been around for a while. For much of its history, Graffitti activists were reviled – especially by the uptight and the “respectable” – as “commies”, “leftist crazies” and “hippie environmentalists”.

However, Graffitti has always had a penchant for community activism. She supported farmers threatened with eviction from their land in Tal-Virtù to make way for a golf course. He opposed the development of Portomaso in the 1990s which offered the Fenechs a beautiful stretch of public coastline in St Julian’s.

Since then, Graffitti has honed its brand of community activism, transforming itself from being the voice of protest to becoming the catalyst for community voices of protest to organize and be heard.

Since 1993, some local communities have benefited from dedicated high-profile figures (usually mayors, with or without the support of the rest of the council) who, even at the risk of offending their original party, raise their voices and dedicate their energy to save their locality. Paul Buttigieg from Qala and Christian Zammit from Xagħra immediately come to mind as prime examples.

Other communities have not been so blessed. Take Naxxar, where at least three times the local community has been sold off by its local council. Such communities, stranded by their councils (whose vested interests must lie elsewhere), certainly welcome the likes of Graffitti to organize and express their fate.

In response to my last post, Wayne Flask, graffitti activist and writer, asked me if I agree that change comes from community action and not “from writers, academics, gurus statistics, engineers, the media or people trying to regain their lost credibility”.

Communities can be agents of change. However, this latest display of parochial madness, with developer Joseph Portelli’s infamous portrait as St. John of Nadur, is nothing but a stark reminder that communities (and communities within communities ) can also act to reaffirm inequitable power relations. It is also a fact that so far most of the ‘positive’ community action has been local in nature and the presence of people like Graffitti and a few altruistic and spirited local leaders has been crucial in maintaining such a resistance together.

For community action to have lasting effects, it needs leadership to inspire, strategize and organize, provide vision and set goals– Alex Farrugia

We are a long way from widespread community engagement that would bring meaningful change to our country. Endemic tribalism at various levels of the community does not help.

No more than the inherited mentality according to which – to quote Voltaire’s Candide – it is better to “maintain your own (back) garden” rather than – to use this much maligned expression – to undertake to “drain the swamp”.

It is quite revealing that a third of the people interviewed for the “Stat tan-Nazzjon” survey admit to having asked for help/favours/assistance from politicians, perpetuating the system of political patronage which is at the base of petty and less petty corruption that afflict this country.

That said, I tend to favor Flask’s belief that in the current situation, if any jerks that could shake the system do occur, they will inevitably come from community action. These would likely be different communities with different interests and because of different concerns, acting independently of each other – so let’s keep our feet on the ground and don’t confuse earthquakes with earthquakes.

Where I think I differ from Flask’s worldview is that I continue to believe that artists, intellectuals, media, etc., have a crucial role to play in shaping the consciousness of our communities and lead to radical change – if only their interest lies in the desire to see this nation evolve and mature.

For community action to have lasting effects, it needs leadership to inspire, strategize and organize, provide vision and set goals – including forging alliances of interests and concerns that transform communities isolated into a flourishing movement for change.

The problem that I pointed out in the previous article, and that I reiterate, is that at present, I doubt how much the people Flask has identified as “writers, academics, gurus of statistics, engineers, media, etc.” (forget the irredeemable “people trying to regain lost credibility”) are willing to set aside their vested interests to further the growth of this nation.

Instead, they continue to re-enact the rituals and reiterate the narratives that keep the public conscience mired in petty parochial distractions. And again, I think Wayne and I agree.

In the meantime… Let’s open a can of Lager as the banda approaches and the beaming face of St Joseph Portelli looks on, the sweaty bums, singing his praises for sponsoring our pseudo-baroque bandalora!

Aleks Farrugia is a writer and historian.